RoeblingFest 2017 commemorated the 150th anniversary of the completion of the iconic John A. Roebling Bridge. Festivities took place on Saturday, June 17th in the Roebling Point area at the Covington end of the bridge. This was the 13th Annual RoeblingFest.  Billed as a Celebration of Art, Architecture, History, and Engineering.  RoeblingFest is an activity of the Covington-Cincinnati Suspension Bridge Committee — the citizens group dedicated to the preservation and enhancement of the John A. Roebling Bridge.

The Cincinnati Civil War Roundtable manned a table at this event.  Thanks to all the volunteers who helped out.  Hopefully I few more tri-staters now know about the CCWRT. 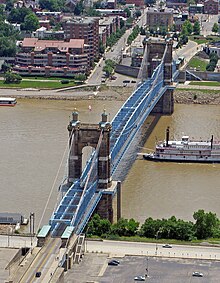 History of the bridge during the Civil War era

Construction began on the historic suspension bridge between Covington and Cincinnati in 1856, but work soon halted due to the Panic of 1857.  In July 1858, operations resumed again, albeit with a smaller workforce. Only one tower was to be worked on at this time. Work was again delayed during the years 1859–60  with the death of the president of the construction company.

Upon a threatened siege of Cincinnati from Confederate forces in 1862, a pontoon bridge was built to span the Ohio River allowing Union troops to cross and construct defenses. After the invasion threat subsided, it became obvious that a permanent structure was vital. Money from investors now came pouring in. With new funding in place, machinery was ordered, materials began arriving, and new derricks were built. However, a new threat of invasion in 1863 caused another temporary pause in the work. In the spring of 1864, work resumed once more. The Civil War depleted the work force on the project, hindering speed and efficiency. Nevertheless work on the bridge proceeded steadily throughout the rest of the war.

In September 1865 the first two wire ropes were laid.  With the Ohio River “spanned,” there was a final push to complete the project even through floods and freezing temperatures. The cabling of the bridge went at a feverish pace, having about eighty wires taken across the river per day. Hundreds watched the spider-like process from both shores. And on June 23, 1866, the last wire was taken across. Suspenders were hung from the cables by the end of August and 600,000 feet of oak lumber was laid as the floor across 300 wrought iron suspended beams. Two tracks for streetcars were laid. Wrought iron trusses were added, running the length of the bridge.

On December 1, 1866, pedestrians walked upon the bridge, known locally only as “The Suspension Bridge,” for the first time. Over 166,000 people walked across in the first two days. Final touches were put on the bridge over the next few months, and construction would officially end in July 1867. When the Roebling Bridge was formally opened on January 1, 1867, the driver of a horse and buggy was charged a toll of 15 cents to cross; the toll for three horses and a carriage was 25 cents. Pedestrians were charged one-cent.