Contribution made towards the purchase of mobile signage for the Harriet Beecher Stowe House located at 2950 Gilbert Ave, Cincinnati, OH 45206. 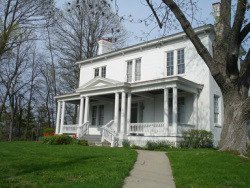 This is the home where Harriet Beecher Stowe lived during her formative years that later led her to write the best-selling novel Uncle Tom’s Cabin.  Because the Beecher family assisted freedom seekers while living here, the house is also a recognized site on the National Underground Railroad Network to Freedom. The Network also includes  John Rankin House in Ripley; and the John Parker House in Ripley.

This house was home to Harriet Beecher before her marriage to Calvin Stowe in 1836, and to her father, Rev. Lyman Beecher, and his large family, a prolific group of religious leaders, educators, writers and antislavery and women’s rights advocates. The Beecher family includes Harriet’s sister, Catherine Beecher, an early educator and writer who helped found numerous high schools and colleges for women; brother Rev. Henry Ward Beecher, a leader of the women’s suffrage movement and considered by some to be the most eloquent minister of his time; Gen. James Beecher, a Civil War general who commanded the first African American troops in the Union Army recruited from the South; and sister, Isabella Beecher Hooker, a women’s rights advocate.

The Beechers lived in Cincinnati for nearly 20 years, from 1832 to the early 1850s, before returning east. Shortly after leaving Cincinnati (and basing her writing on her experiences in Cincinnati), in 1851–1852 Harriet Beecher Stowe wrote the best-selling book of its time, Uncle Tom’s Cabin, a fictionalized account of the pain slavery imposed on its victims and of the difficult struggles of slaves to escape and travel via the Underground Railroad to freedom in the northern states or Canada. Published just after the fugitive slave laws were enacted by Congress in 1850, the book made Harriet Beecher Stowe a household name. Uncle Tom’s Cabin has been published in over 75 languages and is still an important text used in schools all over the world.