Donation to Museum of the Confederacy.  Museum has since been renamed the American Civil War Museum. 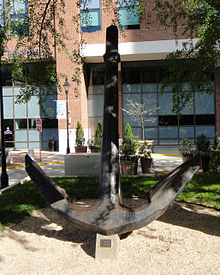 Anchor of the CSS Virginia

The museum is in the process of constructing a major new building on the site of the historic Tredegar Iron Works in downtown Richmond. The new building will feature more than 7,000 square feet of new gallery space for permanent and changing exhibitions of items from the museum’s renowned collections of Civil War artifacts, as well as an “immersion theater” highlighting Richmond’s role in the war. The 8.9 acre site also will feature a new outdoor exhibit, living history demonstrations, and a new Family Resource Center, to be located in the historic Administration Building. Groundbreaking and site preparation for the outdoor exhibit will take place in early 2018. Those projects will include a reconfiguration of the site’s landscaping, repair of the historic canal wall and leveling of the grounds on the site’s upper level.