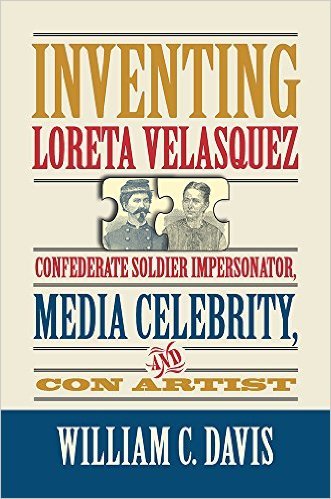 She went by many names—Mary Ann Keith, Ann Williams, Lauretta Williams, and more—but history knows her best as Loreta Janeta Velasquez, a woman who claimed to have posed as a man to fight for the Confederacy. In Inventing Loreta Velasquez, acclaimed historian William C. Davis delves into the life of one of America’s early celebrities, peeling back the myths she herself created to reveal a startling and even more implausible reality.

This groundbreaking biography reveals a woman quite different from the public persona she promoted. In her bestselling memoir, The Woman in Battle, Velasquez claimed she was an emphatic Confederate patriot, but in fact she never saw combat. Instead, during the war she manufactured bullets for the Union and persuaded her Confederate husband to desert the Army.

After the Civil War ended, she wore many masks, masterminding ambitious confidence schemes worth millions, such as creating a phony mining company, conning North Carolina residents to back her financially in a fake immigration scheme, and attracting investors to build a railroad across western Mexico. With various husbands, Velasquez sought her fortune both in the American West and in the Klondike, though her endeavors cost one husband his life. She also became a social reformer advocating on behalf of better prison conditions, the Cuban revolt against Spain, and the plight of Cuban refugees. Further, Velasquez was one of the first women to venture into journalism and presidential politics. Always a sensational press favorite, she displayed throughout her life an uncanny ability to manipulate popular media and to benefit from her fame in a way that prefigured celebrities of our own time, including using her testimony in a Congressional inquiry about Civil War counterfeiting as a means of promoting her latest business ventures.

So little has been known of Velasquez’s real life that some postmodern scholars have glorified her as a “woman warrior” and used her as an example in cross-gender issues and arguments concerning Hispanic nationalism. Davis firmly refutes these notions by bringing the historical Velasquez to the surface. The genuine story of Velasquez’s life is far more interesting than misguided interpretations and her own fanciful inventions.

William Charles “Jack” Davis is an American historian who was a Professor of History at Virginia Tech and the former Director of Programs at that school’s Virginia Center for Civil War Studies.  Davis has twice been nominated for a Pulitzer Prize (for Breckinridge: Statesman, Soldier, Symbol and Battle at Bull Run). He has written more than 40 books on the American Civil War and other aspects of early southern U.S. history.  He is the only three-time winner of the Jefferson Davis Prize for Confederate history and was awarded the Jules F. Landry Award for Southern history.