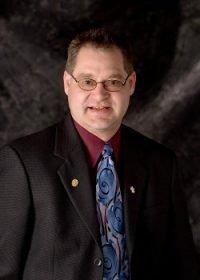 The May meeting of the Round Table welcomed back to the podium Wayne Motts, chief executive officer of the National Civil War Museum. Wayne and his colleague, James A. Hessler, have written a new battlefield guide Pickett’s Charge at Gettysburg: A Guide to the Most Famous Attack in American History. Wayne was prepared to tell us everything we wanted to know, and in some cases to disabuse us of things we thought we knew, about that singular event. It is the most talked-about frontal assault in the Civil War and is the turning point of the Battle of Gettysburg. And although Pickett’s forces were only one part of the Confederate attack on the Union left July 3, 1863, it has been called Pickett’s Charge from the beginning.

The first day of the battle belonged to the Confederates. They had driven the Union Army off of the ridges north and west of the town and on to Cemetery Ridge and the hills south and east of the town. Robert E. Lee’s plan for the second day was to have James Longstreet’s corps make the principal attack against the Union left down by Little Round Top. A.P. Hill was to threaten the center of the Union line, while Richard Ewell made a simultaneous demonstration on the Union right at Culp’s Hill, exploiting any opportunities that might present themselves to commence a real
attack. The Peach Orchard was a key objective because it was elevated. In Lee’s own words, published in the Official Reports: “In front of General Longstreet the enemy held a position from which, if he could be driven, it was thought our artillery could be used to advantage in assailing the more elevated ground beyond, and thus enable us to reach the crest of the ridge.”

By the end of the second day Longstreet’s men had destroyed Union General Daniel Sickles’s Third Army Corps and gained the Peach Orchard and the Wheat Field; but the Union still held Cemetery Ridge, Big and Little Round Top, and the Devil’s Den. The Confederates had momentarily taken East Cemetery Hill but could not hold it. Again, in Lee’s own words, “The result of this day’s operations induced the belief that, with proper concert of action, and with the increased support that the positions gained on the right would enable artillery to render the assaulting columns, we should ultimately succeed, and it was accordingly determined to continue the attack. The general plan was unchanged.” But ultimately Lee did not get the “proper concert of action”
on July third, and the artillery did not render the planned support. General George Pickett’s forces arrived at Gettysburg late in the day on July second, and were not engaged. These fresh troops were to link up with Longstreet for a morning attack on the center-left of the Union line, while Ewell commenced a simultaneous attack on the Union right. But the Union Army got the jump on Ewell by attacking Culp’s Hill early on the morning of the third before Longstreet, with Pickett, could get in position opposite the center of the Union line. Just about day break, Lee rode down to the Peach Orchard area and met with Longstreet to reexamine the military situation. Over Longstreet’s objection that his troop strength of 15,000 was insufficient, Lee determined that he would attack the center of the Union line: he would have the artillery pound the Union line and when the attack commenced would move the artillery forward with the advancing columns. For Lee, the role of the artillery was to batter the Union line, to kill the Union defenders, to destroy Union morale, and to fire as the columns advanced. But the artillery did not do the four things Lee hoped it would do. Most of their shots in the two hour cannonade preceding the attack went over the Union Army. In the speaker’s view, the failure of Confederate artillery on July third is why Pickett’s Charge failed, which is the same view expressed by Lee in his official reports: “Owing to this fact [that the artillery had nearly expended its ammunition] which was unknown to me when the assault took place,” “. . . the attacking columns became exposed to the heavy fire of the numerous batteries near the summit of the ridge, and, after a most determined and gallant struggle, were compelled to relinquish their advantage, and fall back to their original positions with severe loss.”

How many were engaged in the action? The number of Confederate soldiers who participated in the charge has continuously been revised downward in the past 30 years. It was originally thought to be 15,000, the number Longstreet used, but the speaker believes it was about 12,500. While the numbers for Pickett’s forces, who were not engaged on the first two days, are fairly accurate, parts of four divisions participated in the attack. Many of those Confederate units had fought on the 1st and 2nd; and the Confederates calculated their casualties only at the end of a battle, not every day. Thus on the third day those units were no longer at their initial strength. By the same token the number of Confederate soldiers who were wounded is understated, because Lee had issued a general order that if a wounded soldier could still carry a musket or perform duty, he was not to be counted as wounded. So out of 12,500, probably 8,000 Confederate soldiers were casualties. Between 500 and 1000 were casualties of the Union cannonade, as the shots that went over the Confederate artillery, which was the target, hit the troops which were positioned behind the batteries.