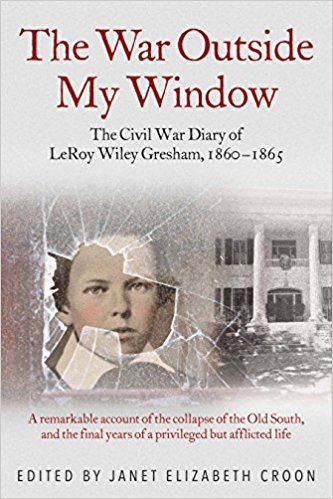 An in-depth discussion about how one of the  most important Civil War Diaries was found, how it came to be published, the genius of the young teenager who wrote it, and the amazing insights we gain from it.  LeRoy Wiley Gresham was born in 1847 to an affluent slave-holding family in Macon, Georgia. After a horrific leg injury left him an invalid, the educated, inquisitive, perceptive, and exceptionally witty 12-year-old began keeping a diary in 1860–just as secession and the Civil War began tearing the country and his world apart. He continued to write even as his health deteriorated until both the war and his life ended in 1865.  The War Outside My Window captures the spirit and the character of a young privileged white teenager witnessing the demise of his world even as his own body slowly failed him.

LeRoy read books, devoured newspapers and magazines, listened to gossip, and discussed and debated important social and military issues with his parents and others. He wrote daily for five years, putting pen to paper with a vim and tongue-in-cheek vigor that impresses even now, more than 150 years later. His practical, philosophical, and occasionally Twain-like hilarious observations cover politics and the secession movement, the long and increasingly destructive Civil War, family pets, a wide variety of hobbies and interests, and what life was like at the center of a socially prominent wealthy family in the important Confederate manufacturing center of Macon. The young scribe often voiced concern about the family’s pair of plantations outside town, and recorded his interactions and relationships with “servants” Howard, Allen, Eveline, and others as he pondered the fate of human bondage and his family’s declining fortunes.

Theodore P. Savas is the Managing Director of Savas-Beatie, a leading independent trade publisher in military and general history titles.  He graduated from University of Iowa College of Law in 1986 (with distinction), and practiced law in the Silicon Valley for many years. Realizing one day he would have to face St. Peter, he decided to go into honest work. Ted taught business and history classes for about 20 years, and has written or edited a dozen books (published in 7 languages) including A Guide to the Bas of the American Revolution, Hunt and Kill: U-505 and the U-Boat War in the Atlantic, Nazi Millionaires: The Allied Search for Hidden SS Gold.  His hobbies include scuba diving, smoking good cigars, drinking expensive gin, and playing bass and keyboards in the hard rock band Arminius.