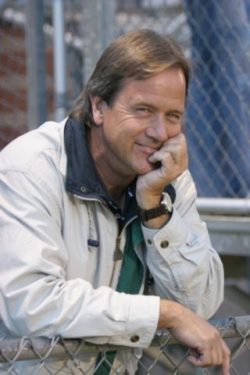 “It’s a shame a book like this has to be written.” This is the opening sentence of the introduction to Stephen M. Hood’s book, John Bell Hood: The Rise, Fall, and Resurrection of a Confederate General. Mr. Hood, who goes by the nickname “Sam,” was the engaging and entertaining speaker at our April 21st meeting.

A self-proclaimed amateur historian and ‘C’ student from a non-Ivy League university, he never expected to be the one to bring General Hood’s papers to light. “Hood’s papers discovered me,” says Sam. Sam is a second cousin of General Hood, being a direct descendent of Hood’s grandfather. Using the available resources, he set out in his retirement to correct the many inaccuracies written about John Bell Hood.

The General’s personal papers were considered to be lost, due to the circumstances of his death. Tragically, Hood, his wife and their oldest daughter died within a few days of each other in 1879, leaving ten orphans, aged 4 months to 9 years. The children were adopted by seven different families in five states, and scholars assumed that in the chaos, the papers had been hastily discarded. While the manuscript for the book was in editing, a 72-year-old great-grandson of John Bell Hood called Sam from Philadelphia. The man’s mother, Hood’s granddaughter Babs, had just died at age 96, and in going through her belongings, he had found boxes of old papers. The only name he recognized in the letters was that of Robert E. Lee. Sam spent six days there looking through the boxes, which he felt contained astounding historical information.

His publisher immediately returned the manuscript to Sam to be reworked in light of the discovery. Sam later published the transcribed letters and documents in an annotated volume, The Lost Papers of Confederate General John Bell Hood. In the boxes was a previously unpublished picture of General Hood on crutches, taken in January or February of 1864 after he had recuperated from the amputation of his right leg at Chickamauga and had learned to use a prosthesis. During his rehabilitation in Richmond, Jefferson Davis promoted Hood to corps command in the West under General Joe Johnston, and Hood returned to action in the winter of 1864. This injury had occurred just months after General Hood’s left arm was injured at Little Round Top in July 1863.

Hood’s papers included a three-page report by Dr. John T. Darby, detailing the location on the field where he was hit, a specific anatomic description of the wound, and his rehabilitation, such as which specific motions he could and could not perform with that arm. Dr. Darby’s twenty-page report of General Hood’s leg amputation was also in those boxes, naming the physicians involved in his treatment, the details of the surgical procedure, his daily progress notes, and medications used, including iron for blood loss and quinine. Despite the liberal use of morphine at that time, Hood only took it at night to help him sleep. ©2016 The Cincinnati Civil War Round Table 6

History has portrayed Hood as argumentative and unwilling to accept responsibility for mistakes. His memoirs supported this, in that he devoted a large portion of the book to an argument with General Johnston. Also, because many of his extant letters to Jefferson Davis were critical of Johnston, his superior officer, he was thought to have been underhandedly seeking promotion. However, the “lost letters” contained correspondence from Lewis T. Wigfall, a member of the Confederate Congress and Hood’s former commander, that indicate the letters to Davis actually may have been responses to questions Davis posed to Hood about Johnston’s performance. Post-war letters from General Stephen D. Lee were found, asking if Hood planned to set the record straight regarding Cheatham’s blunder at Spring Hill, Tennessee.

For the rest of his life, Hood maintained that he had ordered General Cheatham several times to move his corps to block the road to Franklin. Cheatham denied he had received any order…and outlived Hood by five years to continue to deny it. Additionally, the boxes contained two framed letters: one from Thomas Jonathan Jackson and the other from James Longstreet, both recommending John Bell Hood for promotion. The latter was also signed by Braxton Bragg, James Seddon (Confederate Secretary of War), and Jefferson Davis. Further discoveries included Hood’s diploma from West Point (signed by Franklin Pierce) and certificates commemorating his promotion to Brigadier General, Major General, Lieutenant General, and General.

After the war, Hood lived in St. Louis and traveled in the insurance business. Sixty letters he wrote to his wife revealed the General to be a religious, sweet, and gentle man who called his wife “My most precious one” and who advised his son to not bite his brothers and sisters. Hood became friends with St. Louis resident General William T. Sherman during this time, and letters from him were also discovered, including a note of condolences on the death of Hoods’ wife, signed “Truly your friend, WT Sherman.” Hood never received this letter, as he died a few days after his wife. The first question asked at the end of Sam’s presentation was, “What happened to the papers??” Sam consulted with archivists and advised the family on proper preservation. They decided to keep the letters in the family, but have moved them to secure off-site storage. The documents are included in the digital archive at Confederate Memorial Hall in New Orleans. The family may consider a public exhibit in the future.