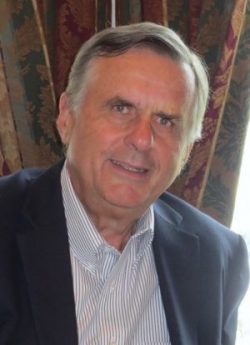 At our February meeting, Gene Schmiel told us the story of the amazing life of Jacob Dolson Cox, a self-made “Renaissance man” who was, at various times, a military leader, office holder, university and business executive, scientist, and historian. Mr. Schmiel is a retired Foreign Service officer who holds a doctorate from Ohio State and who has taught at several eastern Universities.

His book Citizen-General: Jacob Dolson Cox and the Civil War Era was published in 2014 and is a History Book Club selection. Mr. Schmiel suggested that Cox (1828-1900), a leading citizen of Cincinnati who is buried at Spring Grove, may be the most capable but least known celebrity in the City’s history. Cox began his public life as an “introverted intellectual,” attending Oberlin College as a divinity student. He left there to practice law in 1853 in Warren, OH, where he helped found the Ohio Republican Party. He served one term in the Ohio House starting in 1859.

When war came, Cox was appointed Brigadier General of Ohio Volunteers by Governor Dennison. Cox’s friend and superior George McClellan directed him to oversee training of new volunteer troops at Camp Dennison. Despite Cox’s lack of any practical military experience, he was then sent with 2,500 of those troops to help pro-Union citizens in the Kanawha Valley. He and General Rosecrans succeeded beyond expectations, embarrassing Confederate General Robert E. Lee.

Cox’s “Kanawha Division” later served with distinction in the 1862 Shenandoah and Maryland Campaigns. His troops took Frederick, Maryland, and routed the enemy at South Mountain. When the Federal 9th Corps commander died, Cox assumed its command just prior to Antietam. There, General Burnside sent Cox to attack on the left flank, where his men came close to sweeping Lee from the field, but a delay in launching the final assault allowed A.P. Hill’s men to counterattack, leading to a draw. In Antietam’s aftermath, Lincoln “fired” Cox’s two “godfathers” (McClellan and Burnside), and Cox was sent with Burnside to Cincinnati (a non-combat posting).

Eventually, Cox was named deputy commander of General Schofield’s Army of the Ohio and participated in the 1864 Atlanta Campaign. His men outflanked the Confederates at Kennesaw Mountain and then cut their supply line, causing them to abandon Atlanta. While top Federal commanders like Scott and Halleck had low regard for non-West Point officers and routinely derided “citizen generals,” General Sherman saw Cox as different and asked him to “march to the sea,” but Schofield needed Cox for other duties in the Western theater. Cox played a key role at the Battle of Franklin, Tennessee, stopping Hood’s infantry charge towards a break in the middle of the Union line.  Displaying great personal courage, Cox rallied the troops with “superb magnetism … wresting victory from defeat.” This battle effectively ended fighting in the West.

Cox also had an illustrious post-war career: Governor of Ohio (1865) for one term; Secretary of the Interior (1869); President of the Wabash Railroad (1873-77); U.S. Congressman (1887-89); Dean of the Cincinnati Law School (1880-97), and President of the University of Cincinnati (1885-89); back in Oberlin, he was a scientist and historian. Cox may be best known today for his well-researched, objective, and still influential Civil War history writings. In short, in each of his vocations and avocations – as his gravestone says, “Soldier, Statesman, Scholar, Patriot” – Cox was an eminently capable leader. He was a Cincinnatian of great skill and accomplishment, who should be better known and celebrated than he is today.