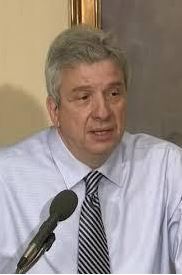 The CCWRT welcomed David G. Moore to our meeting of Sept 15th. 2016.  David brought an in depth look at the life of General William Rosecrans.  Rosecrans was a person of whom there were differing opinions, not only in respect to his military career, but his private life as well.  David’s book digs deep into the life of a man dedicated not only to the ideals presented by emancipation, but a man who understood that his God had work for him to do.

Rosecrans was a highly intelligent man, graduating fifth in his class at West Point Military Academy which in itself was a feat to be admired as he had no formal education prior to his acceptance at this great school.  He had taken it upon himself to learn all he could by reading, pushing himself onward, not only becoming a skilled officer, but a man of outstanding business success, an inventor, executive, diplomat, and christian witness who clearly understood that indeed “ALL MEN ARE CREATED EQUAL”.

General Rosecrans enjoyed a measure of success in the battles of Rich Mountain, Iuka, Corinth, Stones River,  the Tullahoma Campaign, and Price’s Raid.  However, there was one place where Rosecrans got into trouble, and that was at Chickamuaga.  According to the varying accounts one can read of this battle, it is not clear if Rosecrans’s errors were the result of miscommunication, lack of information, or misinterpreted intel.

The commonly accepted modern day belief is that consensus developed quickly and naturally within the War Department that Rosecrans should lose his command following defeat at Chickamauga. However, David Moore delved into these events a little deeper and found documents indicating the demotion was, as much as anything, the result of a single influential Illinois congressman, Elihu B. Washburne.

Washburne was a radical Republican, U.S. Grant booster, and held considerable sway over the Lincoln administration.  Moore asserts sufficient evidence exits to conclude it was Washburne’s who persuaded the War Department to demote Rosecrans.  Moore believes Washburne wanted to do as much as he could to use promote Grant’s profile while at the same time diminishing that of the Democrat Rosecrans. This would allow Grant to be viewed as a more favorable possible successor to Lincoln rather than Rosecrans.  This, according to Moore, was the real reason that led to Rosecrans’s demise.

Despite the tarnished reputation crafted by leading Republicans at the time, the men who served under “OLD ROSEY” really loved their commander.  In the evenings when he would ride the lines, the men would cheer for him.  In return Rosecrans always had friendly words for the men under his command.  The affection felt for Rosecrans had lasted well after the war ended as displayed by speeches made at GAR reunions.

David Moore did a great deal to peel away the layers and expose the heart of General Rosecrans, and is to be commended for his research and construction of his book WILLIAM S. ROSECRANS AND THE UNION VICTORY. If you were not in attendance to purchase the book at the meeting, you may obtain it from AMAZON AT ABOUT $35.00 or Kindle for much less.