ATLANTA — What, exactly, do you do with a 130-year-old work of art, mythmaking and Civil War history that is longer than a football field, more than 40 feet tall and urgently in need of a new home?

This city is finding out. After decades of deepening disrepair and disinterest in the painting commonly known as the Atlanta Cyclorama, workers this month are moving the panorama as part of a $35 million plan to rescue and maintain a titanic, deteriorating example of an art form that has mostly disappeared.

Saving “The Battle of Atlanta,” which is among the largest oil paintings in the world, has proved to be an undertaking of remarkable complexity. It is rife with logistical tests, engineering quandaries, curatorial challenges and political and racial sensitivities that linger more than 150 years after Gen. William T. Sherman’s military campaign here. Yet after taxpayers spent years supporting an imperiled painting in a building troubled by leaks and temperature fluctuations, formal opposition to the effort, which is privately funded by multiple philanthropists, is strikingly scarce.

“The fact that this painting has survived when so many others were left out to mold and rot and get burned up and whatever is nothing short of a miracle,” said Gordon L. Jones, the senior military historian and curator at the Atlanta History Center, which reached a license agreement with the City of Atlanta to display the cyclorama. 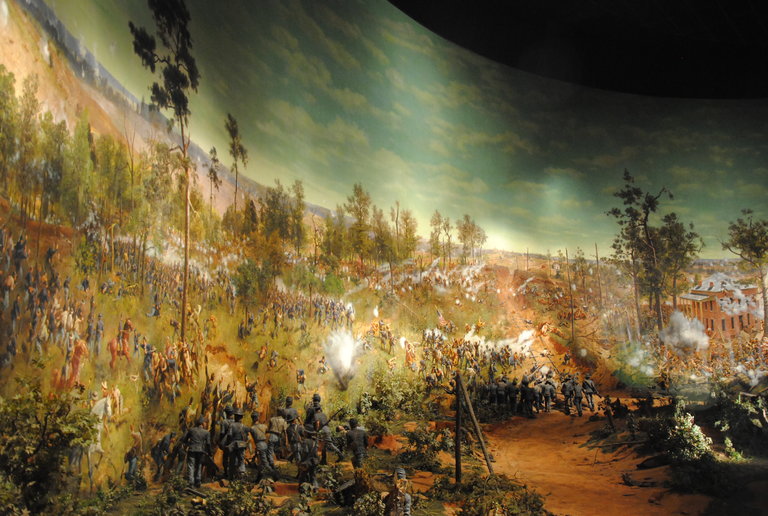 “The Battle of Atlanta” is among the largest oil paintings in the world. Philanthropists have donated $35 million to help relocate, restore and maintain the 1886 painting over the next 75 years. CreditAtlanta History Center

CCWRT has been fortunate in that bad weather has forced us to cancel a meeting only two times in the last fifteen years, but we want to be prepared to communicate last minute information on meeting day if necessary. If bad weather makes the streets difficult to travel, you can check the following sources to determine if the meeting is still on or if it has been cancelled:

Lester will make the decision on the status of the meeting by noon the day of the meeting. The decision will be based on the condition of the roads, the safety of our members, the status of the speaker, and the Drake Meeting Center’s ability to serve us. If a cancellation is required, we will have a June meeting to make up for the cancelled date because we are contractually obligated for eight meetings per year.